HomeWhat’s Happening?Business5 Things You Need to Know About Quiet Quitting

5 Things You Need to Know About Quiet Quitting

Quiet quitting went viral this summer in a major way. Perhaps due to the fact that it first showed up as a phenomenon on TikTok, some have concluded that it’s something unique to Gen Z. Actually, that’s far from the truth. So, to help debunk these and other quiet quitting myths, here are 5 things you need to know.

(1) Quiet quitting is a misnomer insofar as there’s no interpretation of the term that actually involves quitting.

What’s in a name? Well, the term is actually quite prejudicial in that it creates the impression that persons who engage in the behaviour are denying employers of something that is legitimately due to them – that they are breaching a contract. (More on that later…)

Some critics have proposed “act your wage” as a substitute for quiet quitting and drawn attention to the notion that there’s a need to discuss quiet quitting as a response to the indignity of being quietly fired — i.e., not getting wages or promotions commensurate with labour or the rising cost of living.

(2) Quiet quitting is not about avoiding work; it’s about ensuring that you have a meaningful life outside of work.

Quiet quitting’s underlying ambition to draw clearer boundaries between work and life is a healthy one in a society where the hustle culture mentality tends to dominate.

The pandemic made people more aware of their mortality and triggered introspection on their values and how said values are manifested in the way they live out their lives. For many that introspection led to cognitive dissonance – a sense that they weren’t being true to themselves. This in turn led to a decline in job satisfaction.

Like the dog who chased the car, then caught up to it and realized that it was a Pyrrhic victory[1], workers who previously bought into the hustle culture are now questioning both the approach and the outcome.

It is instructive to note that at least one country has implemented legislation to mitigate the adverse impact of the hustle culture. In 2017, France implemented a “right to disconnect law” which requires companies with 50 or more workers  to draw up a charter enshrining their employees’ right to disconnect from digital communication outside of regular business hours.

(3) While Gen Z may be posting more about quiet quitting, they’re not the only ones who are not engaged at work.

According to the State of the Global Workplace 2022 Report, only 21%[2] of employees are engaged with their work. Employee engagement is the propensity to expend discretionary effort – i.e. to go above and beyond the minimum requirements.  Therefore, we can interpret the latest data from Gallup to indicate that four out of five employees could be in a position to quiet quit — i.e., restrict themselves to the minimum requirement. 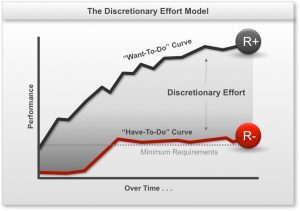 Here’s the thing, while Gen Zers makes up 32% of the global population, they constitute a relatively small portion of the workforce. Why is that? Simply because, the oldest members of that demographic are just 25 years old. So, clearly the 79% of workers that Gallup found to be unengaged or disengaged simply cannot be all Gen Z.

(4) Quiet quitting is a possible consequence of an employee’s perception that the employer has breached their psychological contract.

The psychological contract covers variables such as:

Employees who perceive that the employer has breached the implied contract may manifest their disapproval/disappointment via reduced job satisfaction, performance and commitment and ultimately increased turnover.

For example, an employee who constantly receives non-specific/nebulous promises of upward mobility in the long term when they expected real-time opportunities for growth and development may conclude that the employer has breached their psychological contract and respond by scaling back their willingness to go above and beyond – i.e., to expend discretionary effort.

(5) Leaders have both a business imperative and a moral obligation to proactively mitigate the risks associated with quiet quitting.

The previously cited 2022 State of the Global Workplace Report found that organisations that take responsibility for the wellbeing of their employees are more likely to:

What does such proactive risk mitigation look like? Primarily, it manifests as a transformational leadership style, where employers and managers consider the professional and personal needs of the employees. This will help make employees feel heard and is likely to improve productivity.

The alternative is a more transactional approach which leads employees to reduce their level of effort to what they consider to be commensurate with what they’re being paid.

More specifically, to successfully navigate this space, leaders should…

So, there you have it, 5 things that I hope will break through all the noise about quiet quitting and place the underlying phenomenon in its proper context. Even more importantly, I trust that leaders will take on board what quiet quitting symbolizes and take the necessary steps to do re-assess and re-affirm their psychological contract with employees so that it equitably reflects the interests of both parties.

[1] We define Pyrrhic victory as “a victory that is not worth winning because so much is lost to achieve it.” The word comes from the name of Pyrrhus, a long-ago king of Epirus, who suffered heavy losses in defeating the Romans at Asculum in Apulia in 279 B.C.E. [Merriam-Webster Dictionary]

[2] In terms of the geographic breakdown, the US had an engagement rate of 33% while the corresponding figure for Latin America and the Caribbean was 23%.