EMPLOYEE ENGAGEMENT – HOW DO YOUR PEOPLE REALLY FEEL?

I’m currently running a poll on LinkedIn to ascertain which topics are of greatest interest to the Maximizer Community.  While the poll has only been active for a few days, Employee Engagement has already emerged as the number one area of interest. Therefore, I’ve decided to dedicate the next few issues of this blog to that important and problematic topic.

Why is employee engagement so problematic? Because it’s complicated, and in many instances, it seems to be going from bad to worse. Let’s start with a definition and see if we can bring some light to the matter.

My preferred definition of employee engagement is the extent to which employees feel passionate about their jobs, are committed to the organisation and put discretionary effort into their work. Discretionary effort is essentially anything above and beyond the minimum requirements to retain one’s position. This is illustrated in the diagramme below. 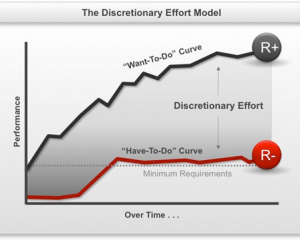 I first started paying keen attention to this topic when I read the Gallup 2013 global workplace report and learnt that only 13% of employees globally could be described as engaged. By any standards, that certainly isn’t good news. Please see the diagramme below for the other results of that global survey and the one that followed in 2017.

Gallup wasn’t the only one sounding the alarm on this issue. A 2015 HBR article revealed that LinkedIn had indicated that 25% of its 313 million members were active job seekers, while an additional 60% could be described as passive job seekers i.e., people who were not actively looking for a new job but who were seriously interested in new job opportunities.

More recently, in a June 2018 article, Inc. reported that 70% of the global workforce were passive candidates. The advent of the Covid pandemic in 2020 further exacerbated the situation outlined above and precipitated what has been dubbed the great resignation.

In addition to the turnover that’s been dominating the headlines, there’s another phenomenon that’s warrants our attention – namely, employees who are clocked in but essentially already checked out. In other words, they are physically present but are either not engaged or actively disengaged.

There are a few pointers that can help leaders determine if their staff members are with them based on a genuine desire to be a part of the team or whether they’re just hanging in there because they’re either averse to change or are biding their time until they line up another job.

I encourage you to take a moment and think about the members of your team. Is there anyone who is manifesting one or more of these five pointers? As a leader, how can you ignite (or rekindle) the flame of passion to ensure that such employees remain on board, not out of a fear of change, but rather out of a sincere feeling of engagement and passion for the contribution that they’re making to the team.

In case anyone thinks that this is just a storm in a teacup and researchers are making much ado about nothing, I should point out that there is a statistically significant positive correlation between employee engagement and several key business outcomes. Those outcomes include profitability, productivity and customer ratings. In other words, organisations with more engaged employees are more profitable, have higher productivity and enjoy better customer ratings.

The research also revealed statistically significant inverse correlation between employee engagement and absenteeism, employee turnover, theft and quality defects. So, the less engaged employees are, the more likely they are to miss work, to quit and to generate poor quality products and services.

In this first installment of our examination of employee engagement, we have focused on defining the phenomenon, identifying the trends over the last seven years and highlighting why employee engagement is an important indicator for businesses to monitor and manage. In the next issue, we will examine the drivers of employee engagement and discuss specific measures that you can take to emulate the success recorded by global best practice organisations. You don’t want to miss out on that.