HomeWhat’s Happening?BusinessBack to Office Mandates – Is This Really What Your People Want?

Back to Office Mandates – Is This Really What Your People Want?

Back in 2020, when the pandemic forced employers all over the world to go into lockdown, necessity became the master of invention. Organisations in all sectors had to scramble to figure out creative ways to remain operational in the face of pandemic-induced restrictions on their traditional business models. Entities that had never envisioned a world where staff would not be physically present were forced to innovate or become obsolete.

Those global realities led to major transformations in the deployment of technology, redefining both WHAT enterprises did and HOW they did it.

Managers had to reconceptualize what it meant to lead work teams.

In the context of the aforementioned changes, the concept of a manager’s line of sight had to be redefined to reflect a less literal meaning. Some organisations were more effective and efficient in their navigation of this externally dictated change. However, the circumstances were such that none could escape the forces driving the change.

Fast forward to 2022… The availability of vaccines and the widespread adoption of protocols designed to reduce the spread of the COVID-19 virus heralded calls for a return to office (RTO).  The response of employees to RTO mandates has been mixed. In this article, we share some of the findings  of primary research into this phenomenon and invite you to apply your mind to what obtains in your own organisation.

There is no shortage of published reports on how employees feel about hybrid work arrangements. On April 1, 2021 McKinsey published an article with the following lead quote:

Employees want more certainty about postpandemic working arrangements—even if you don’t yet know what to tell them.

Even as employers fought to come to terms with the uncertainty of what work would look like in a post-pandemic world, employees had begun to express certain preferences. According to previously mentioned McKinsey study, 52% of employees want a more flexible (hybrid) model in the post-pandemic era. This is up 22 percentage points compared to pre-pandemic polling results.

In that same study, McKinsey found that the number of workers expressing a preference for onsite work fell by 25 percentage points – i.e., from 62% to 37%. So we see that globally the shift in worker preference is significant.

In May 2022, I conducted a poll on LinkedIn to gauge Caribbean workers’ perspective on the desirability of the same working arrangements covered in the McKinsey study. Forty-one percent of my poll respondents indicated that they preferred to work remotely. This is significantly higher than in the McKinsey study where only 11% of respondents expressed a preference for remote work.⁠

⁠Only 5% of my poll respondents want to return to the pre-pandemic model of exclusive onsite work. This was significantly lower than the 37% of respondents in the McKinsey study.⁠ 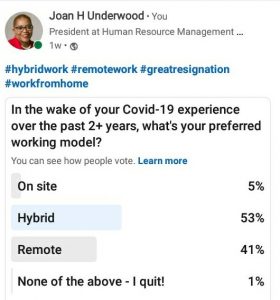 Elon Musk created quite a stir recently when he notified Tesla staff that they were expected to return to the office for at least 40 hours a week. In his trademark rash style, he went on to say that anyone who didn’t comply should find a new job. Musk was not alone in his ‘RTO or Quit’ ultimatum. Meta and Google were on the same page.

Here’s the thing, after working from home (WFH) for the past two plus years, workers have come to appreciate the flexibility that it represents. In many instances, they have rearranged their lives and relationships to reflect that new normal. Attempts to undo such new habits and practices by decree is not without risk and carry no guarantee of success. Just ask Apple CEO Tim Cook.

We’re conducting the mother of all tests because we have no idea… We might be the first to declare the starting point is most likely incorrect and require adjustments.  [Tim Cook]

According to published reports, there seems to be a significant divide between how organisational leaders and those whom they lead view RTO mandates. Corporate executives are leaning towards ending WFH. A March 2022 survey conducted by Cleaning Coalition of America canvassed 200 New York-based C-Suite executives and found that 76% think that in-person work is essential to their organisation’s bottom line. However, workers have grown used to the flexibility it provides, and in many instances may not be willing to give it up without a fight. The preference for WFH is particularly prevalent in knowledge workers. Those who have been subject to RTO mandates have reported that their ability to focus, their stress levels and their level of satisfaction at work have all deteriorated.

According to Microsoft’s Work Trends Index, 80% of employees opined that they were just as productive or even more productive under their WFH arrangements. Their leaders beg to differ with less than 50% sharing that opinion.

The divide is further compounded by the fact that even employees who initially welcomed the RTO mandates may now be singing a different tune. Seventy percent of office workers globally are reported to now be back in office for at least one day a week, and they are reporting that the initial excitement has waned as they begin to question the rationale for being back in offices which no longer resemble the pre-pandemic realities.

What’s so different about post-pandemic onsite work? Well, in many instances, hybrid arrangements mean that not everyone is on site at the same time. Therefore, those workers who were looking forward to interacting with their peers may still be finding themselves doing so via Zoom or Microsoft Teams when their days in office don’t coincide. Additionally, the in office experience may not be what it used to be since many employers have scaled back their physical space or other pre-pandemic accommodations. 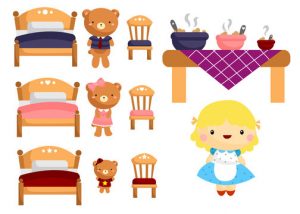 So, what is the optimal solution or work arrangement? As is so often the case, the answer is it depends…

The bottom line is that there is no single, one-size-fits-all work arrangement. The optimal arrangement depends on a number of variables including but not limited to:

While individual circumstances will vary from organisation to organisation and even among individual workers, one thing that leaders navigating this challenge should realize is that the path to sustained success in the face of this challenge is not likely to result from high-handed, unilateral decrees but rather from respectful and empathetic communication and consultation.