HomeWhat’s Happening?BusinessThe Paradox of Women being a Minority in Leadership Positions

The Paradox of Women being a Minority in Leadership Positions

The original version of this article was published just over five years ago. With the recent publication of the 2021 Women in the Workplace Report, I thought that it would be useful to examine how the status quo compares with what obtained five years ago. The result is a mixed bag. Read on to learn more…

When the Millennium Development Goals (MDGs) were developed back in 2000, gender equality and the empowerment of women was included among the eight goals. While there was indeed progress made along some fronts  e.g. the number of women in parliament has almost doubled in the past twenty years  we’re still a way off from doing a victory dance. For this reason, when the global community came together in 2015 and agreed on seventeen Sustainable Development Goals, gender equality again featured among the priorities. 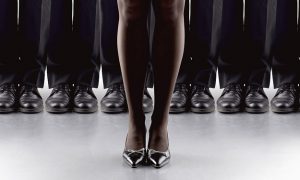 So, why do women continue to be under-represented in leadership positions – particularly in societies where girls outperform boys at all levels of the educational system. When the research has clearly shown that women in senior political roles tend to exert positive influence on socioeconomic development and drive policies geared towards improving the standard of living for all sectors of society, why is it that we remain under-represented?

2016 – 2021 UPDATE: The graphic below clearly illustrates that there has been an increase in the percentage of women in the US corporate pipeline at all levels from entry to C-Suite from 2016 to 2021. However, women in general and women of colour in particular continue to be under-represented.

Despite accounting for slightly more than half of the general population and constituting the majority of university graduates, the percentage of women at the top three levels of the corporate pipeline varies from 24% in the C-Suite to 30% at the VP level. 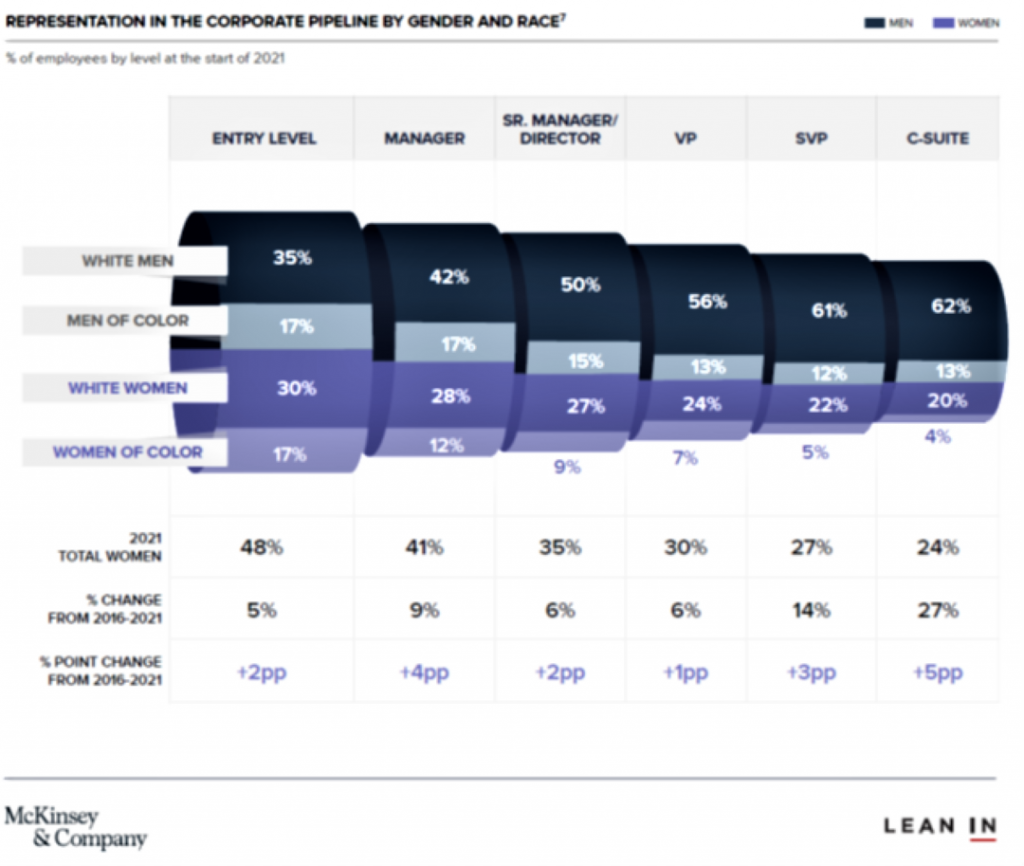 The study also found that for every 100 men promoted to managerial positions, only 86 women received similar promotions. This anomaly becomes exacerbated as we move to higher levels. To understand the factors driving this reality, we can draw on the work of Shaheena Janjuha-Jivraj and Kitty Chisholm as published in Championing Women Leaders: Beyond Sponsorship which explores factors which contribute to improved gender diversity in public and private sector leadership. 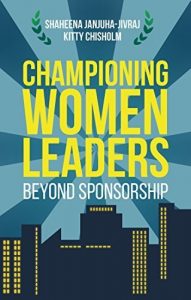 In this context, this term refers to factors such as political and economic empowerment, health provisions and education. By systematically and consistently focusing on remedying historical biases in the various systems, countries can begin and indeed, have begun to erode and rectify such biases. So, for example, the use of quotas has served to give women access to positions which they would not otherwise have attained.

I hasten to point out that the report card on the use of quotas is not an unqualified success since in some instances women who have been elevated through a quota system have not had the benefit of the necessary preparations or ongoing support to enable them to perform at an optimal level. And that brings us to three additional factors which Shaheena and Kitty explore in their publication.

There is an important dynamic between government, corporate/organizations and women’s advocacy groups. When advocacy is vibrant and informed by valid research including reference to enlightened self-interest, and when the work of such groups finds fertile ground in government and civil society, progress is likely to come more readily. However, when elected governments eschew consultation and collaboration outside the limited parameters of general elections every 4-5 years and assert that once they have received a mandate, all the power is concentrated in their hands and all parties are duty-bound to implement their policies without question or equivocation, progress is more likely to be an exception rather than the rule.

In addition to the relationships that exist at the national level, the culture within specific organizations is vital. Public and private organizations which acknowledge the importance of diversity and capitalizing on the value that all human resources can bring to the table are more likely to foster, support and reinforce the development of women leaders. Specific measures in such instances may include mentoring, coaching as well as financial and other support to enable women leaders to fully participate in professional development and other capacity building activities.

Those organizations which merely pay lip service may simply go through the motions by appointing a token number of women to leadership positions and then pointing to less than optimal performance to make the case that quotas and other affirmative action measures do more harm than good.

2016 – 2021 UPDATE: Given recent events in the USA, it would be remiss of me not to mention institutionalized racism and implicit bias as additional factors impacting the upward mobility of minority women (and men) in corporate America.

The first three factors play out at the macro and meso levels. There is an equally pivotal micro-level factor  i.e. one-on-one relationships where current and aspiring women leaders take responsibility for networking and developing other relationships which can support their professional development.

I had the distinct honour of being one of sixty women from fifty-five Commonwealth Countries invited to be interviewed as a case study for the publication Championing Women Leaders. While our stories are quite diverse, there are a number of features/realities which we all share. They include tenacity, resilience and the support of powerful figures who were willing to go to bat to create opportunities for us to showcase our talents.

Through this forum, I’d like to take the opportunity to thank three men with whom I’ve had the privilege to work and who have gone way beyond the requirements of being a boss to champion my professional growth and development. They are the late Calvin Rodgers, Sir Eustace Francis and former Prime Minister of Antigua and Barbuda Hon. W. Baldwin Spencer. Each of these gentlemen saw potential in me and was unwavering in their support even as they provided me with stretch assignments. Equally important, they made it safe for me to learn while doing.

Like the other women featured in the case studies, my experience with my own champions motivated me to pay it forward by in turn mentoring, coaching and supporting other women and men as they pursued their own leadership journeys. 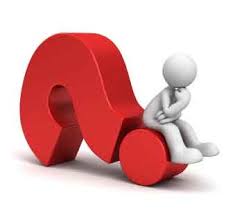 Why would a country handicap itself by either deliberately or inadvertently failing to capitalize on all the resources men and women at its disposal?

Why would the stewards of any entity – whether public or private –  fail to fully develop and deploy all the talent at its disposal?

When presented with the formula for success, why would any leader aspiring or current; male or female  hesitate to devote time and effort required to lobby for and leverage the winning factors outlined above?