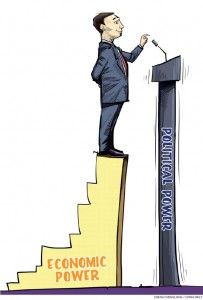 I recently attended a social dialogue hosted by the Eastern Caribbean Central Bank (ECCB). The focus of this dialogue which involved sitting governments, opposition parties, faith-based organizations, trade unions, private sector organizations and international development partners was Working Together to Achieve Higher and More Inclusive Growth in ECCU[1]. The theme resonated with me in part because of the current administration’s thrust to transform Antigua and Barbuda into an Economic Powerhouse. While this expression was first touted during the campaign leading up to the 2014 general elections, it has never actually been clearly defined. Further, while certain persons have been facilitated in wealth creation, the case can be made that the wealth is not trickling down in a way that benefits the majority of citizens and residents.

Devil in the Details?

As a patriotic citizen, I consider the aspiration to be an economic powerhouse to be a commendable goal. However, at the risk of sounding like a clich, the devil is definitely in the details. Here are just some of the questions that I along with many others would like to have answered:

The Martin Prosperity Institute (MPI) in the University of Toronto explores the necessary requirements to achieve a prosperous future for all  one in which democracy and capitalism work in support of each other. The index is based on the following indicators:

If Antigua and Barbuda were to get an interim report card to help us determine how near or far we are to achieving the goal of being an Economic Powerhouse, what might be some of the comments attached to the indicators identified above?

In terms of our economic clout, we are certainly a big fish in the fishbowl that is the Organization of Eastern Caribbean States. Therefore, if that is the universe in which we aim to be an economic powerhouse then we could certainly check that box according to the statistics contained in the following table.

When we examine the strength of our finance and banking sectors, the picture changes drastically. The systemic shocks and loss of confidence associated with the implosion of R Allen Stanford’s empire, the ongoing CLICO and BAICO saga, the failure of ABI Bank and Antigua Overseas Bank and the more recent bailout of Caribbean Union Bank paint a worrisome picture. Even more recently, we have Meinl Bank’s embroilment in the Odebrecht scandal

In terms of global competitiveness, one has only to look at our ranking in the World Bank’s Doing Business Report to realize that we’re closer to bottom of the pile than the top with our 2017 ranking being 113 out of 190 countries.

The picture is even drearier when it comes to equity and quality of life. That conclusion is informed by Antigua and Barbuda’s Gini coefficient of 0.48 which is the worst in the ECCU. The Gini coefficient is a statistical measure of the degree of variation represented in a set of values, used especially in analysing income inequality.

The situation re quality of life is equally worrisome as citizens and residents contend with the chronic lack of potable water, frequent power outages, poor road infrastructure, high unemployment (as high as 34% among youth) and one of the highest cost of living rates in the Caribbean.

So here’s how I see things based on the foregoing:

Economic Clout: B+ (when restricted to the universe of the OECS)

Quality of Life: C- (for the majority of citizens while admittedly an elite group including members of the political directorate score a solid A)

So what is your verdict? Have I been too harsh? Too lenient?

What grades would you assign to each variable based on your own national and personal circumstances?