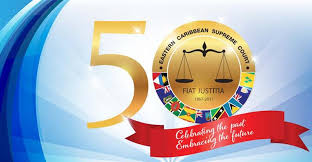 This week, the Eastern Caribbean Supreme Court (ECSC) celebrated its fiftieth year as only the legal fraternity knows how – i.e. with much pomp and ceremony. This milestone comes at a time when the quality of Caribbean jurisprudence is the fodder for heated debates from talk shows to bars (if not at the Bar). UTDS’ friend and collaborator Justin L Simon, QC has graciously shared with us the text of his address to the Court on this auspicious occasion. We publish that address and ask that you take note of his call to action on two fronts – both geared towards “building a stronger, and more independent Supreme Court with greater equal access to justice for all, while preserving the public’s trust and confidence.”

ADDRESS IN COMMEMORATION OF THE 50th ANNIVERSARY

OF THE EASTERN CARIBBEAN SUPREME COURT

HALLS OF JUSTICE, ANTIGUA and BARBUDA

And with your leave, Mi Lady, I wish to recognize the Hon. Prime Minister of Antigua and Barbuda, retired Justices of Appeal and of the High Court, Registrars of the Supreme Court, Chief Magistrate, and her colleague Magistrates, the acting Hon. Attorney General, the President of the Industrial Court, and the President of our local Bar Association.

I stand here representing the new generation of legal practitioners who were ushered into the ever-growing legal fraternity from October 1975 by the joint collaboration of the University of the West Indies’ Faculty of Law, and the two Law Schools established by the Council of Legal Education.

It is with esteemed honour that we at the Bar recognize and pay homage to you Mi Lady as the first female and more, the first female UWI and Law School graduate to hold the distinguished position of Chief Justice of our Supreme Court. We of course pay tribute to those of similar high educational ilk who currently sit as Justices of Appeal, and Justices of the High Court, and those who in the not-too-distant past have given yeoman service in these high judicial positions. It cannot be gainsaid that we as graduates of our indigenous law institutions have played a significant role in the service, growth, and development of our Supreme Court over the last thirty of its fifty years, be it in the field of legal study and research, academic writings, court room advocacy, written judgments and judicial pronouncements, civil procedural reform, continuing legal and judicial education, and legal policy guidance and legislation.

We must also recognize and laud the fact that our Supreme Court has provided the Caribbean Court of Justice with three of its seven eminent judges: Sir Dennis Byron, a former Chief Justice and currently CCJ President having taken his oath of office on September 1, 2011; Mr. Justice Adrian Saunders, a former Justice of Appeal who also acted as Chief Justice, and who took his oath of office at the CCJ’s Inauguration Ceremony on April 16, 2005; and recently- appointed Mr. Justice Denys Barrow (yet to take his oath of office), and who also served as a Justice of Appeal of our Supreme Court.

Boldly, but with deep humility, I say of the institution that we respectfully recognize and today celebrate as the Eastern Caribbean Supreme Court: Hearty Congratulations on your 50th Birthday! Fiat justitia ruat caelum!! (Let Justice continue to be done, even if the heavens fall).

Much has been said by the previous speakers of the Court’s achievements, and its development over the years with a stated Mission: To serve its Member States by providing access to a system of justice that is accountable and independent, and administered by officers in a prompt, fair, efficient, and effective manner”. With your leave, Mi Lady, I would now want to take a leap from that established and accepted platform; not into darkness, but with the torch of expressed continuity firmly in hand, into a path of enlightenment and entrenched indigenous independence for the future of our Court structure and its justice system.

Firstly, that the traditional method of funding the Court through budgetary allocations from each member state, be eradicated. As at December 2015, the aggregate indebtedness to the Supreme Court by the nine (9) OECS countries stood at $21,397,959.29. As at December 2016 that indebtedness had increased to $24,073,185.29. I recall an English ditty learnt at Elementary School which went like this: January brings the snow / makes our hearts and fingers glow. In the case of the OECS countries indebtedness to our Supreme Court, we can say: January has brought increased liability / they now need to put more money into the Court’s kitty. A whopping $27,419,292.21.

Given our current stagnant or falling economies, do we expect this state of affairs to change for the better any time soon Consider the improvements which could be made by our Court administrators were these monies to be made available: modern and properly equipped court rooms throughout the jurisdiction, up-to-date software, better trained and more qualified staff, increased training and continuing judicial education, more legal research personnel, more judges both in the High Court and the Court of Appeal, increased specialized divisions , and better remuneration taking into consideration skill-sets and higher expectations. Yet again, I make the call for the establishment by the OECS Governments of a Trust Fund with financial and actuarial assistance from the Eastern Caribbean Central Bank, and the Caribbean Development Bank. The financial independence and resulting rapid service expansion of the Caribbean Court of Justice in just 11 years since its inauguration on April 16, 2005 stands as a beacon of enlightened guidance and a testament to best practices.

Adopting the CCJ in its Appellate Jurisdiction

Which now brings me to my second submission. The failed referenda in St. Vincent and the Grenadines, and more recently Grenada, and our current challenges here in Antigua and Barbuda in holding a referendum on accession to the Caribbean Court of Justice, as our final regional appellate court, must give us pause for deep and sober reflection. I stand here committed to the jettisoning of the Privy Council. That English Judicial body has served us well for the most part, but attaining our full circle of independence from Britain demands a fully indigenous court structure, which would only serve to strengthen our Supreme Court and be our legacy to future generations.

The Commonwealth of Dominica has, on February 27, 2015, acceded to the appellate jurisdiction of the CCJ. How do you think this will affect our jurisprudence with two final appellate courts serving our one sub-region? What of the principle of stare decisis, which is one of the well-known pillars of judicial consistency and legal development It is my view that the other governments of the region should carry that essential agenda for reform to the people with one unified non-political voice and organize for a plebiscite on the same day. The Hon. Attorney General can make the case at the next meeting of OECS Attorneys General.

And as an “obiter dictum”: there is a crying need to give serious consideration to increasing the tenure of our judges by raising the retirement age. Today, more than ever before, age is usually a source of pride and bespeaks knowledge and experience – two fundamental judicial attributes. Given the current composition of our Bench I would, Mi Lady, respectfully add “grace” . . . .and probably, “charm” to these attributes.

In closing, I implore us not to be blind to the realities of today. If we do, then our continued development in whatever field of endeavour will be stymied. We must not pretend to be deaf to the cry of members of the public that they are unhappy with the service that they get from the court system – even with the increase in legal practitioners, and notwithstanding the steady growth in numbers among the more sensitive, caring, and understanding of the two genders.

Our judges cannot speak on matters outside of their judicial remit. They depend on us at the Bar. Let us, therefore, as legal practitioners whether individually or through our Bar Association, make the case to our government and to members of the public for the sooner implementation of these two measures in the interest of the continued growth and stability of our 50-year old court system and its processes. So that, when we celebrate the next milestone whether 5, 10, or 20 years from today, it can be said with much aplomb that we played our part in building a stronger, and more independent Supreme Court with greater equal access to justice for all, while preserving the public’s trust and confidence.

Mi Lady Chief Justice, Justices of Appeal and of the High Court, I am thankful for your kind indulgence. I rest on my Submissions. May it please the Court!

Citizens and residents have repeatedly expressed concern and lack of satisfaction with matters related to access, timeliness of hearings and judgments and the quality of decisions. Even as we acknowledge the significance of the milestone being celebrated, UTDS reiterates earlier calls for judicial reform. We also call upon OECS governments – and particularly the government of Antigua and Barbuda – to capitalize on the existence of the Judicial Reform and Institutional Strengthening (JURIST) Project which has been created with the express objective of “establishing a judicial system that is more responsive to the needs of women, men, youths and businesses”. Certainly, we can all get behind that goal!