HOW TO TRANSFORM POTENTIAL TO GREATNESS

Have you ever looked at the success of someone famous or even someone in your personal sphere and thought “Boy, they’re lucky!” or “Man, they’re just naturally talented!”? Well it turns out that, while luck and natural talent don’t hurt, they’re definitely not sufficient if your goal is to achieve greatness.

In this article, we deconstruct what’s required to transform potential to greatness. In doing so, we look at the life story of award-winning singer/songwriter Ed Sheeran and the work of Daniel Coyle as published in his book – The Talent Code.

How is this relevant to current and aspiring leaders? The formula for maximizing potential is not restricted to musicians, artists or athletes. Rather, it’s applicable to anyone who wants to master their chosen craft – that includes leadership.

Ed Sheeran – From Sh!t to “Perfect”

During one of his media appearances, Ed caught many off guard when he rubbished the idea that his success was attributable to natural talent. In this video clip, we see and hear him share a truly cringe-worthy singing performance. He chose to keep the recording to remind himself and others of the importance of honing your craft.

So how did Sheeran go from a gauche amateur with the cracking voice to the phenomenal history-making, award-winning musical icon that he is today? Well, here’s a highly abridged version of his story…

By the time that he was 11 years old, Ed was already playing the guitar and showing early promise. Around that time, he met singer-songwriter Damien Rice who encouraged him to write his own music. The youngster took that advice to heart and began doing so the very next day. Then at 14, he headed to the bright lights of London to officially launch his musical career.

The big city didn’t exactly roll out the red carpet for the young artist.  However, he was undaunted and continued to churn out content and had released two albums by the time he was 16. The year he turned 18, Sheeran played more than 300 live shows. He was grinding. He was mastering his craft.

Then he had a breakthrough when he ventured into social media as an avenue for getting his work out to a wider audience. That audience included more established artists who saw his potential and opted to partner with him. In addition to those partnerships, Ed continued to churn out his own music. Then he hit the jackpot in 2011 when he was just 20 years old.

Atlantic Records recognized the talent in the young musician and signed him. His debut album with them sold more than a million copies in the UK within six months of its release. It was dubbed an instant hit. However, the reality is that the “instant hit” had been over a decade in the making.

Fast forward to 2017 when Sheeran (then 26 years old) penned the love song “Perfect”, which went on to earn him the record-breaking distinction of remaining on the Billboard Hot 100 for an entire year.

To round out our cliff notes version of Sheeran’s journey from sh!t to “Perfect”, check out the accompanying graphic for Sheeran’s tally of awards.

In this bestselling book, journalist Daniel Coyle presents extensive primary and secondary research to make the case that ability really can be created and nurtured. The best news of all is that we can each achieve our full potential if we set about training our brains in the right way.

And what exactly is the right way? Deep practice…

We must begin with an understanding and appreciation for the entirety of what we want to accomplish. Once we grasp that, we then need to deconstruct it by breaking it down into its constituent parts and mastering each aspect. So, for current and aspiring leaders, it is important for us to get really clear about what leadership is and what are the elements that come together to make a great leader.

Once we have chunked down the overall task, we then need to apply our minds to mastering the individual components or chunks. And that comes from practice – including failing or falling short and then examining that failure to extract the lessons and apply them in the next round of practice.

To get to the sweet spot where we internalize the learning to the point where our performance becomes more instinctive or natural, we have to get out of our heads figuratively speaking and let our hearts take over. [For the science geeks among you (if any exist), it’s interesting to note that this process of getting out of our heads actually takes place in our brains… in our myelin to be exact.]

For the non-science geeks, we can find a simpler explanation of what happens at this stage in the following graphic detailing the progression from being unconsciously unskilled to unconsciously skilled. 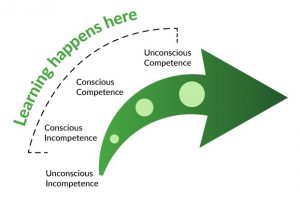 Over this trajectory, we move from not knowing what we don’t know (i.e. being unconsciously incompetent) to become aware of our lack of knowledge and ability (conscious incompetence).

Honing our craft then takes us first to being consciously competent and ultimately to the point where we are unconsciously competent. It is at this point, that our performance at the highest levels of proficiency seems natural and may lead casual observers to conclude that we are simply naturally talented or just lucky to be able to perform at that level.

Every winner was once a beginner.

While every winner was once a beginner, there is no guarantee that every beginner will become a winner and attain the status of unconsciously competent. However, there are some lessons that we can learn from the experiences of Sheeran and other winners that we can use to enhance the likelihood of our own success.

1.  Have a clearly defined vision of what constitutes success for you

Only you can define your personal vision of success. Get specific with it. What does it look like? What will it feel like? Why is it important to you? Who else will benefit when you achieve it? Conceptualize it. Talk about it. Believe in it. Pray about it. Own it.

2. Seek out mentors and sponsors

Being intrinsically motivated is very important. However, do not equate that with isolating yourself and failing to draw on the guidance and experiences of others. Be very intentional about seeking out others who can help you to navigate the journey to your success. In doing so, be very clear that the responsibility for doing the work rests with YOU.

Complacency will kill your dreams and rob you of success. Therefore, you should never stop practicing – i.e. putting in the work to hone your craft.

Caveat: Reject the notion that practice will make you perfect. That can lull you into a false sense of security. Perfection is an illusion. Don’t allow yourself to be seduced by the notion that you have attained it. Neither should you allow yourself to be consumed in its pursuit.  Rather, resolve every day to build on what you have already accomplished and to continue to pursue your definition of success.

On your journey to maximizing your potential and achieving success as you have defined it, proactively identify and collaborate with others who see your value and are on a similar journey. This Community will consist both of persons who are further along in their own journey and others who may look to you as the one who may have more experience in a given context. It is important to appreciate that you can learn from both.

5. Resolve to enjoy the journey – not just the destination

Your life doesn’t begin upon arrival at your destination. The journey IS your life. So live it fully… enjoy it! Be fully present for both the trials and the triumphs. And give yourself some grace while doing so.