Two weeks ago we started our four-part great meeting series by examining what needs to take place before the meeting.  This week’s issue is devoted to what’s required during the meeting.  As indicated in our lead quote, preparation is key to success.  While this is particularly applicable to the person leading/facilitating the meeting, it also applies to all meeting attendees. 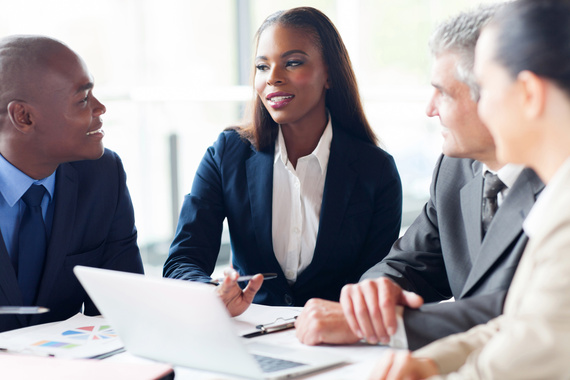 One of the great paradoxes of leadership is that it’s not about you but rather about how you get things done through others.  To facilitate a great meeting, the leader must skillfully guide and direct the process without appearing to dominate it.  The meeting is not about the person chairing it.  Rather it’s about the agenda and the targeted outcomes as outlined in How to Plan a Great Meeting.  It is important to bear in mind that all parties are present in service to those two items.

Let’s turn our attention to six specific steps to take in order to fulfil these obligations.

There is a real temptation to delay the start of the meeting until the majority of the participants have arrived.  What message does this send to those who made the effort – and even sacrifice – to show up on time?  Do you think they’ll make the same effort the next time you convene a meeting?

During my tenure as the HR Manager with a financial conglomerate, I presided over quarterly general staff meetings.  It became apparent to me that the organizational culture considered it acceptable to stroll into the meeting room well after the scheduled start time.  The habit had been inadvertently reinforced by the practice of providing recaps as tardy staff members joined the meeting.

So, to break the back of that non-productive habit, I made a public announcement that meetings would start on time – as long as there was at least one person present (btw, the stipulation that one other person be present was to avoid the questionable spectre of my addressing an empty room).  I went on to point out that this was my way of rewarding punctuality and conveying respect to those who made the effort to ensure that they arrived on time.  Of course, some folks still arrived late.  However, they knew that it was their personal responsibility to bring themselves up to speed on what they had missed – and that they could not disrupt the proceedings to do so.

Respecting the time also means adhering to the time allocated for each agenda item and concluding the meeting at the scheduled time.  In the event that you note that the deliberations are legitimately taking longer than anticipated, the appropriate course of action is to draw the matter to the attendees’ attention and give them the opportunity to have input in the decision about whether to move forward with the agenda or to extend the time.  By involving them in the decision-making process, you minimize the risk of having them feel like they’re being held hostage.

As facilitator, it’s your responsibility to ensure that everyone present has the opportunity to contribute to the discussion.  Some people will need no special invitation, while others will need to be drawn out.  The caveat here is that you need to ensure that this is done in a way which is positive and not in a way that appears to be picking on them.  This may require the use of softeners, and open ended questions are definitely more effective. E.g. “Jason, we know that your department has experience implementing similar projects.  What are some of the lessons learnt that could be beneficial to us as we take on this new project?”

One of the reasons why it’s safe to call on Jason relates to what we covered in the first instalment of this series – i.e. we know that we have the right people in the room and that they had prior knowledge of the matters to be discussed and the specific preparation they needed to complete ahead of the meeting.

Special word of caution – hold off on expressing your opinion until you have heard from the attendees.  If there is a significant power distance, your early declaration could serve to stymie further discussion.  It could also create the impression that you have already made a decision and are just going through the motions in soliciting their input.

We have a tendency to listen in order to be able to respond.  To facilitate a great meeting, we need to listen to understand.  This means that we listen from a place curiosity and that we listen both to what is said and what is unsaid.  It also means that we go beyond using our ears for listening and include our eyes and hearts and indeed our entire bodies.[1]

Attentive listening will also lead us to use questions as an alternative to declaratory statements as a means of advancing the discussion.  It also directs us away from jumping to conclusions, making assumptions and generally pontificating.  Plus we accumulate bonus points when it becomes apparent that we are genuinely and authentically listening and taking in the contributions being made.

This section is for all genders, so I hope you won’t gloss over it… Be on the lookout for cases of manterruping and bropropriating. What exactly do I mean by that?

Manterrupting: Unnecessary interruption of a woman by a man. E.g: when Kanye West made his way on the stage to interrupt/disrupt Taylor Swift’s acceptance speech during the 2009 MTV Video Music Awards.

Bropropriating: Taking a woman’s idea and taking credit for it. Research published by Sheryl Sandberg and Wharton business school professor Adam Grant describes this as follows: “When a woman speaks in a professional setting, she walks a tightrope. Either she’s barely heard or she’s judged as too aggressive. When a man says virtually the same thing, heads nod in appreciation for his fine idea.”[2]

Those who know better should do better. So, now that these two counterproductive gender-related meeting practices have been flagged, I encourage you to wage a campaign to eliminate them from your meetings (or prevent them from starting).

5. Use a Parking Lot

Many potentially great meetings get derailed by important yet non-relevant discussions.  As the guardian of the process, it’s your responsibility to defer such discussions to a more suitable time and forum.  You would have set the foundation for this by clearly identifying the meeting purpose when you sent out the agenda.  Therefore, when such matters are raised, you should not hesitate to tactfully refer participants to the purpose as presented in the agenda even as you acknowledge the importance of the item that has been raised.  The caveat here is that you simply must remember to honour your commitment to have the issue addressed – or referred to the appropriate parties – at a subsequent time.  Failure to do so could have an adverse impact on your personal credibility.

You already know that you need to have your agenda before you in order to facilitate a great meeting.  As decisions are made, go ahead and record them alongside the relevant agenda item.  Your notes should also include task owners, timelines for completion and quality standards.  This helps to ensure that all parties are clear on what constitutes satisfactory completion.  By getting into this level of detail you also ensure that the actions to be taken are optimally aligned with your original purpose/intent.

By reviewing the decisions and action items prior to concluding the meeting, you help ensure that all participants are operating from a shared pool of understanding.  It also provides an opportunity for task owners to seek any required clarification.

Finally, it’s a good idea to circulate a summary of decisions and action items to all meeting participants within a day or two of the meeting – while the discussions are still fresh in their minds.  Receiving that email will also serve as reminder for persons to get started on implementation.

In the next issue which drops on August 24th, we continue this series with a deeper dive into timely and aligned action and meeting follow-up and evaluation.  In the meantime, we would love to hear your thoughts about the six steps we’ve outlined in this issue for facilitating great meetings.

[1] See this blog for more information on how neurolinguistic programming can be used to build rapport. https://coachingandthejourney.wordpress.com/2012/10/22/the-art-of-building-rapport-part-i-mirroring-matching/